This would not be the relaxing saunter through the country that we had once dreamt of. That would have to come next year when we were on our way home – this would be a dash through to Malaysia, where we would be shipping from Port Klang (near as dammit Kuala Lumpur) to Chennai or Kolkata on the Indian side.

Our Thai jaunt got off to a good start – we were back to driving on the left – after 20,000 kilometers or so our steering wheel was finally on the correct side for the roads, all we had to do was remember every time we pulled away… We sped along on the pristine highways and covered 400km stopping in at a truck stop for the night – after getting a little hit of fried-rice to keep our hunger at bay.

Our target was to get past Bangkok before rush hour hit in the afternoon. The good roads helped us on our way and we made it a fair distance past the capital, and then pushed onward further south. 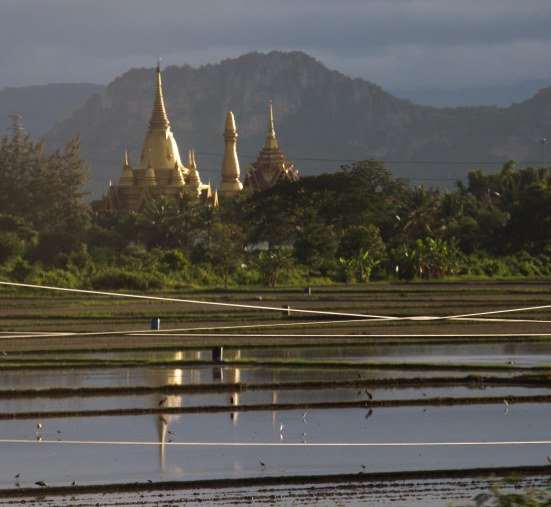 Coach driver’s aside, the road etiquette was pretty good and we even felt comfortable enough to drive a little into the night.

We were doing well on our charge south, but none of the shipping agents that we had been in touch with would be working over the weekend – so unless were going to make up 1200km up in the next 24 hours, we might as well take a break in southern Thailand for a day or so, and do what we could to be in Port Klang for the Monday.

Thai cows have the hump

Friends on the Road

We plucked ‘Trang’ as a target town from our Lonely Planet guide, and made it there before the sun went down. After a couple of noisy restless nights at truck stops, not to mention some long days at the wheel, we were only too pleased to check in to a cheap hotel for the night to recuperate.

One of the highlights of the town was said to be the night market, so we checked it out, and were delighted to find all sorts of Thai delicacies waiting for us for dinner – from bubbling pots of curry, frying pans of errrr… spicy (TBD), we were in our element – and had to reign in our eyes, which were definitely bigger than our bellies.

We even managed to round off the evening with a chilled Chang (Elephant Beer) at the café downstairs at our hotel.

Now being resigned to the fact that no more could be done to aid our onward journey to India before Monday, we were free to make the most of the beautiful country in which we now found ourselves. We spent an industrious morning ticking our way through a to-do list which was far from enthralling – but then we quit town after lunch and made our way towards the beach.

After rolling up at the spot we had picked, we were shocked to find that there was a whole other family there, ruining the tranquillity of the 4 kilometre beach. We did manage to find a space for our beach mats, and the others left soon anyway. There were occasional groups of locals that showed up every now and then, but nothing to really disturb the peace.

With an evening swim, a little hammock time, and some reading on the beach under our belts we slept peacefully in the parking lot that night.

Having done a little too much sitting over the last few days it was time to take a run again. We were up bright and early and made a return trip along the beach – with a refreshing dip waiting for us at the end as a reward.

Not bothering to unload our camping table and chairs we had breakfast inside the back of the truck, but with the door open for some fresh air. Before long we glimpsed a movement outside. Ivor, and the aroma of breakfast emanating from within, had become increasingly interesting to a small pack of monkeys – there were maybe 20 of them in all.

In an instant they were climbing over the truck, and one even had the nerve to start scaling the ladder to our doorway. Vaughan kicked the ladder away, and although that perturbed the little blighter, his amigo was already clambering across the roof and peering down through the open doorway at us.

A worker appeared with a slingshot which scared the monkeys enough that we could get the door shut, without any of the little trouble makers inside. Vaughan went out to get a few photos of them as we got ready to move out.  The leader of the pack tried to show who was boss by making a couple of dummy charges at him with his teeth bared. Although it was nothing more serious than a little display of bravado from the head monkey it was still a little unnerving, and certainly not the courteous welcome from the locals we had come to expect. Maybe we should be getting hold of a sling shot for next time this happens!

With the flea-pickers safely behind us we made for the Malay border, and although the roads made for easy progress, as we neared the border itself it became clear this would not be as effortless as our entry into the country had been.

With 2 hours worth of vehicles lined up in front of us, it would seem that for the Malays taking a day trip into Thailand was a popular weekend pastime, and we had managed to arrive at the border post on Saturday evening, just as everybody else was trying to go home.

If you’re going to be stuck in traffic for 2 hours, it helps to have things like this to entertain you…..

We eventually made it to the front of the queue, and were pleasantly surprised at the general disregard for complex paperwork. As the light was fading we were free to roll on towards the Malaysian border control, in hope of being granted swift passage into their country.